A woman's guide around the globe, for cheap.

Some of my posts start off with that greeting due to my deep admiration of The Simpsons tv show. There’s a character in the show, Dr. Nicholas Riviera, better known as Dr. Nick; a quack doctor whose always prescribing the easy way out. Whenever he comes out in an episode, he always says, “Hi everybody!”. And I’ve always found this quite funny, so I like to say it too.

And there you go.

Now that we’ve exchanged hello’s; I want to tell you about my trip to NOWHERE!

That’s right, my roomies and I drove an hour and a half from home to trek nowhere, and it was totally worth it.

Nowhere is in Southern California, specifically a bridge, in the city of Azuza in Mt. Baldy. The bridge to Nowhere was deemed such because it literally dead ends into nothing, just the wall of the mountain. The reason it’s there? Way back when, (1936) the people of Azuza wanted to build a few roads around the mountains to connect San Gabriel Valley with the city of Wrightwood in San Bernadino,CA; and they did just that. Then, two years later there was a mega flood, go figure in So Cal, that washed away all of their work. Instead of rebuilding, they left the bridge, which was all that was left, to stand forever alone in the mountains. This area is called the Sheep Mountain Wilderness.

I did not see any sheep while there.

A little fyi about the Sheep Mountain Wilderness area, keep your eyes peeled about the miners. The ranger informed us that they are very territorial and do not like to be messed with. They are there searching for gold and aren’t interested in anything else. He also told us of a homicide in that area about 9 months ago. So, um, yeah, totally unrelated, but just so you know.

After you purchase your $5 (per vehicle) adventure pass, you’re allowed to drive up to the beginning of the hike.

In order to reach this far out bridge, you have to park your car and hike up 5.5 miles, so 11 total. Since I walked a ton in Asia, and I’ve only just returned 2 months ago, I thought; hellz yes, 11 miles? No problem.

Well, harty har har, I ate those words up after 2 hours! It was exhausting after 3 hours, and it took us a total of 5 hrs to go and return, but it was completely worth it! Hiking through the Sheep Mountain area was beautiful. The terrain was primarily flat, so it wasn’t so much the ups and downs as it was the sheer distance of the hike along with a rocky path that tired me out. A good pair of hiking boots or a strong pair of legs will certainly be helpful if you decide to go! And do yourself a favor and bring a couple pairs of extra socks. We had to cross 8 rivers, one-way, to reach the bridge. If you’re anything like me, a total klutz, you will fall in and be oh so grateful for a dry pair of socks. My boots were waterproof, so I lucked out for the most part.

To be totally honest, crossing the rivers were my favorite part of the hike. On the way to the bridge, my sister and I took our shoes off and walked across. The water was cold, but so refreshing and soothing on our aching feet! The rocks weren’t too slippery either, always test it first though!

It’s difficult to be sitting still when you have been hit with the travel bug. Although, I’m glad to say I’ve stayed true to my word and begun exploring the world just outside of my front door. If you live in Los Angeles, or anywhere in southern California, add The Bridge to Nowhere on your hiking list for a morning (or full day if you’re slow like me:)) mini trip. 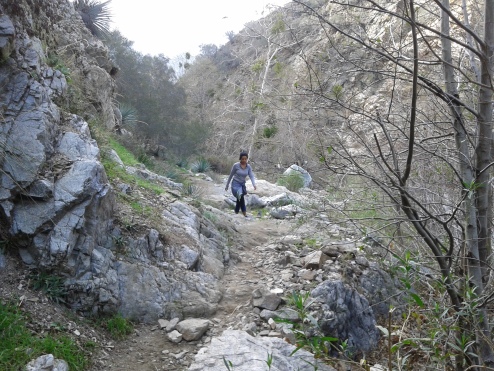 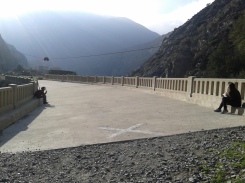 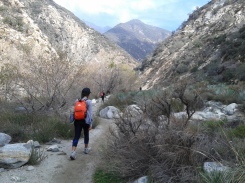 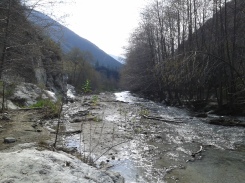 2 thoughts on “Going to Nowhere”